my experience - what has changed - not only physically, but also mentally and family - how does it go on now 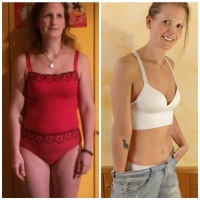 on 10.10.2017 i started to fast. my goal was to fast for 100 days.
at that time i had been eating raw vegan for 2 1/2 years and published photos of my food in the social media. this gave me the chance to meet a woman, melissa keath from joywithrawfood. she has been living raw vegan for over 12 years, feeding her children almost from the beginning and has written many recipe books. it's a great raw vegan family.
in may 2017 in about may she asked if i had children the same age as her children and if we shouldn't do a private exchange. i was thrilled and sent ben to the rohvegan family in australia for 6 weeks. when the summer vacations were over here he came back and brought the son of the family with him.
now it was time for me to prepare food not only for myself but also for him. i was very happy to have someone who could and wanted to join me for dinner. in the beginning it was also great. besides daily smoothies and salads, i also made cakes, tarts, puddings and cookies. i became a great gourmet raw food cook who tried out new recipes with fun and joy. i put them all on instagram and facebook and was happy about the good response.
even before that, i finally started to develop so much self-confidence that i even dared to meet other raw food producers and so i took part in my second raw food potluck on July 23rd. the first one i already had during the easter vacations in spain near malaga. also a very exciting and lasting experience.
in any case, i got to know many nice people at this second potluck with whom i am still friends today and whom i regularly see at potlucks or who I also do something in private.
at some point, when francis, the raw food vendor from australia, had been around for a while, i noticed that i didn't feel so well anymore. and i didn't lose any weight. i had the feeling that i was getting fatter and fatter.
i remembered that at the potlucks i had also met people who only eat fruit and vegetables raw and unprocessed and as a mono meal. for example frank, who had lost weight from 108 kg to 68 kg. that had fascinated me a lot. maybe with a similar diet my well-being would come back and i would be happier again.
but i had to keep on caring for the raw food at home for quite a while. that's why i wanted to fast first and still make cakes and the like. it wouldn't be my first fast and i always had to cook during other fasting phases. i was confident that i would make it.
i read some more books that were important to me, for example my absolute favorite book: heal yourself from markus rothkranz. in it, he describes that one should use the fasting phase as a new start after all. when the body is purified and all the cells that had been built up by pizza and kebabs and the like have been thrown out or emptied again, one should rebuild it with fresh, good food. he propagates water fasting, then juice fasting, then only smoothies as long as one can.